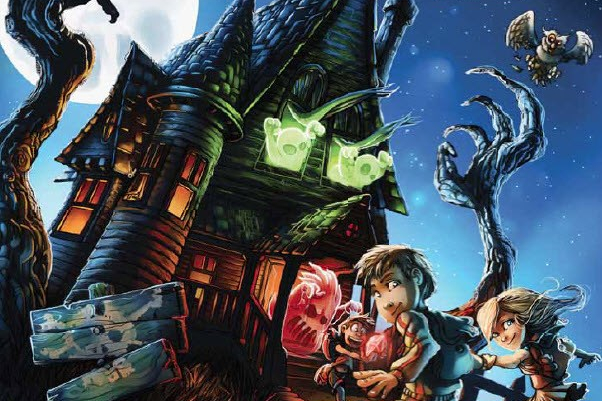 First of all, can you possibly have a better name than “Ghost Fightin’ Treasure Hunters?” The name itself digs deep to my childhood adventurer self obsessed with all things creepy. I knew I’d love this game the moment I saw the name with the cover art. And it’s true. We played our first game with our young boy who was hilarious to watch play. He’d cover his face with his hands, peeking through his fingers when we’d roll to defeat a ghost or Haunting. He’d cheer when the last player escaped the haunted house. And he would silently and proudly pump his fist when he’d defeat a ghost on his own.

We then played two more times that night and five times since! That was like a week ago. =-) We have won twice on the basic mode and lost six. With such a low track record, we haven’t yet tried the cool-looking advanced version which locks certain doors and requires gems be picked up in a certain (hidden!) order. But we’re excited to be good enough to take on the challenge!

This game is so dang enjoyable. Play as one of four kids donning backpacks in search of gems hidden throughout a super scary haunted house. Sounds easy? Not so. Ghosts get added faster than you can defeat them and then turn into more powerful Hauntings. Battle ghosts alone or join forces to battle a Haunting or to try and knock out two ghosts at a time. Get all eight gems and all players outside for the win. Allow six Hauntings to form, and you lose. Simple as that.

The board reminds me of Clue with the different super-detailed rooms, and the gameplay reminds me a bit of Pandemic or Forbidden Island/Desert where players frantically battle the bad stuff (i.e., ghosts, illness, water, or sand) that gets added each turn.

The artwork and pieces are truly incredible. Our kids have as much fun acting out a haunted house scene as they do actually playing the game! How about a ghost lying down in the crib in the baby’s room that jumps out and scares the kid? *Shudder* The ghosts, player pieces, and Hauntings are super durable and high quality. And get this: you actually place the little gems into a slot in the backpacks! So fun.

Gameplay Tip: Join forces whenever you can! Just as you would never expect a successful divide-and-conquer approach in a horror movie (“Why would you split up and go down into the dark, cobwebby basement all by yourself??”), we have failed miserably trying to go on our own. Being able to roll two dice if there are two of you in the same room is invaluable.

Overall, this has been such a fun, quick game to play with adults and kids alike. I give it a solid 8.5. The artwork and quality of pieces knock it out of the park. Also, 2-player gameplay is just as fun as 3-4.

Disclaimer: I received this game for free in exchange for my review, but believe me, I post authentic reviews every time and will be brazenly blunt if needs be.”