This game is immense, creepy, and dark…and you’ll love it. =-) Get sucked into a steampunk world full of grotesque monsters, powerful weapons, and an ever-present Horror inflicting its will on your characters’ feeble minds. It’s perfect for mid- to advanced-level gamers with any interest in steampunk, horror, dungeon crawlers, or the occult.

Work together as steampunk explorers attempting to survive through several chapters of monster-spawning, horror-invoking doom. Explore the dungeon-like maps while you pull monsters into an exploding barrel, ambush them with traps, and use powerful weapon combinations to send them back to the infernal pit from which they came. Be careful not to lose any explorers as they come back to control the hive mind of all monsters in play! 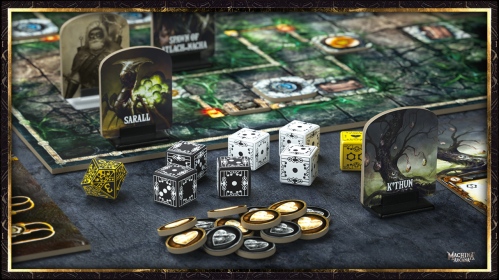 I love that in addition to monsters there is a capital-H Horror presence that feasts on the wills of the characters. Bad, bad things happen when Horror events are triggered! Many games, movies, books, etc. pit the protagonist against a physical monster or group of monsters. In Machina Arcana, the monsters, as powerful as they are, are simply doing the Horror’s bidding. The Horror is nameless, faceless, and creepy as sin. You’ll quickly find a love/hate relationship with this entity. =-)

The items (weapons, apparel, artifacts, and consumables) are incredibly cool as stand-alone items, but the real value comes when you start to merge and enhance weapons with each other. Certain items (weapons and apparel) can be upgraded or augmented depending on the fit with each other. This will yield powerful combinations that are very helpful in defeating the monsters or protecting against evil influences.

Curiosity led me to read Lovecraft’s cult-classic The Call of Cthulhu (how in the world is that pronounced?!) a few years back, and Machina Arcana’s monsters are totally this style. You’ll find the Mi-Go, Sarall, Buopoth, Urhag, the Deep One (think The Shape of Water but nastier), and the infamous Spawn of Cthulhu (just run if he gets invoked!), not one of which I would ever wish to encounter even in my darkest nightmares.

The entire theme with each game’s unique chapters and scenarios is so engrossing! You’ll get sucked into this world of evil and darkness where hope barely hangs on by a thread. Your every choice feels like a life or death decision: Do I activate the trap to kill two mid-level monsters or pull the one powerful monster into the exploding barrel? Do I take the time to enhance my equipped weapon or try and take out the monster right next to me? If you are prone to analysis paralysis, don’t think, just act. =-)

Overall, I give Machina Arcana a solid 8 out of 10 for the following reasons:

Overall, I would very much recommend this one for mid-level to heavier gamers who love shorter RPG-type games and are comfortable with a decent amount of specific rules and conditions. It’s deep, dark, rich, and intense and will hit the table often for many years to come!

41 thoughts on “Machina Arcana Board Game Review: A dark doomfest of monsters and evil lurking around every corner”