The all-powerful Merlin has gone rogue! No one can stop him from wreaking havoc on the poor inhabitants of the land. We lesser wizards have come to the same conclusion: Merlin must die. After careful study, we’ve each discovered our own unique combination of earth, wind, water, and fire spells to take him out. Be the first to learn and cast these spells to kill Merlin and win the game!

Collect mana, buy ingredients, learn spells, cast spells, and maneuver your wizards to the right combination of four spells to cast them and dispatch Merlin. Sounds easy? Wait until Merlin himself royally messes up your plans. Or even other wizards’ spells. The path to victory is clear…you just need to maneuver around the many obstacles and roadblocks to get there. =-) But once you do, you must declare “And with that, I have killed Merlin!” (Bonus points if you record and post it with #KillMerlin.)

I love that each player has a hidden and unique combination of four spells that they have discovered will finally kill off Merlin. All players have all spells visible, but you’ll need to vie your way across the board to just the right spells in order to do the trick. Think of the secret grid card in Codenames (i.e., all words/symbols are visible but only the agents know which are which). While you can deduce who needs which spells, especially near the end, it’s an exciting hidden element to the game. 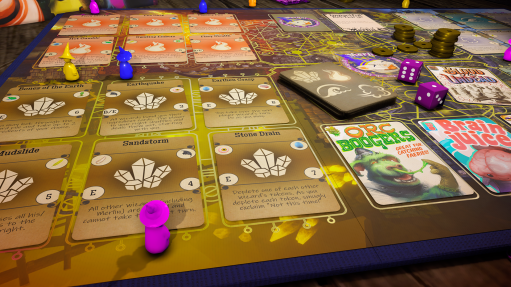 You’ll appreciate how quick and simple Kill Merlin! is. You only need two unique ingredients and three mana to learn a spell (not some crazy combination of a dozen ingredients and hard-earned, elusive mana like some fantasy-based games, especially RPG-type games). Mana is quick to come by (roll a dice each turn to determine how many you receive), and ingredients are churned through fairly quickly. This is particularly beneficial to younger players who may not have the patience to wait several turns to reap a particular reward.

The spells are just the right amount of powerful. They’re not inconsequential enough to have no real effect on the game, but they’re not so powerful that a single spell can alter the entire course of the game (unless it’s that perfect spell right near the end of the game). They are definitely impactful but not overly so. So far, the fire spells have served me best (of earth, wind, water, and fire). =-)

Overall, as a mid-weight strategy game, I give Kill Merlin! a high 8 out of 10 (“enjoy playing and would suggest it” on BGG’s scale) for the following reasons:

I would especially recommend Kill Merlin! for young to mid teens. The theme is just right, the gameplay is fast-paced, and it generates a healthy amount of emotional “game moments.” Don’t forget to set the scene by reading the intro in the rulebook! It’s one of the best I’ve seen.

14 thoughts on “Kill Merlin! Board Game Review: Be the first to dispatch that power-hungry tyrant!”