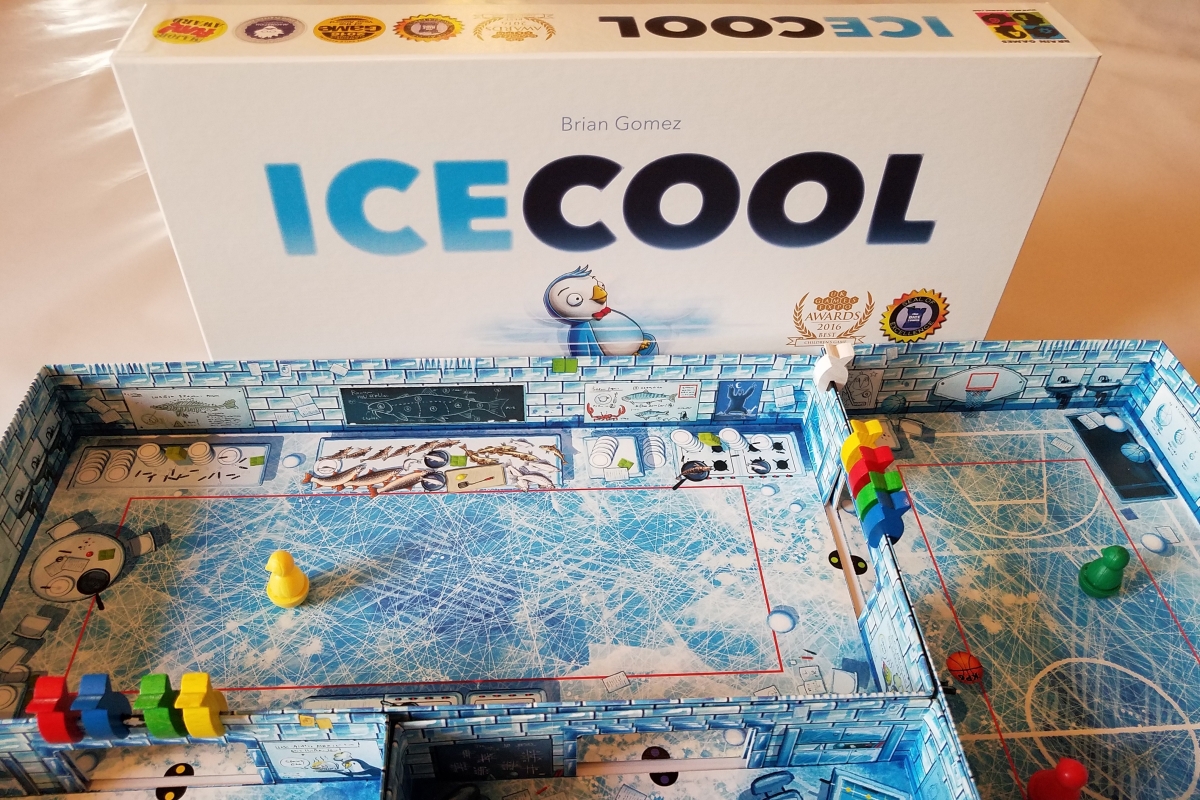 We were not sure what to think of Ice Cool when we first set it up! It completely revolutionizes traditional board game play, and it was unfamiliar to us. We quickly discovered what all the hype is about as we laughed our way through the first game…and the second…and the third…and many more. =-)

Play as a funny little penguin sliding around a school trying to eat as many fish as you can while simultaneously escaping the other penguins who want the fish to themselves! Each round has a catching player who chases the other penguins (runners) before they can collect too many fish. The runners must eat as many fish as they can before being captured. How does this all happen? By flicking! Flick your penguin through doorways, over walls, and around penguins.

This game is such a blast! The penguins are weighted on the bottom (think of a stand-alone punching bag) so they always make their way upright after bobbing around like crazy. When you flick them, they’ll roll all over the place until settling in. Our kids think this is hilarious and almost enjoy the post-game flicking around more than the game itself! I love this dynamic as compared to normal “straight” flicking games.

When I initially saw a picture of Ice Cool, I was picturing a minuscule board with teeny, tiny penguins. My jaw literally dropped when I saw how the boxes unstack and piece together to form a giant, 5-room, 8-doorway school setting. =-) It’s an impressive layout with meticulous detail in the artwork.

It is SO adorable watching tiny hands trying to flick. Watch your young kids’ faces when they do! Something about it just kills me. =-) They scrunch up their face, purse their lips, and really concentrate on getting the flicking motion correct. It’s so dang cute.

Overall, I give Ice Cool a very high 8 out of 10 for the following reasons:

I very much recommend Ice Cool, especially to play with younger kids (maybe 4-8). I’d say it’s an immediate buy for that age group. Otherwise, I’d recommend playing it first before purchasing to see if it’s your cup of tea.

Check out another fun flicking-based game, Ranglin’ Rabbits by Gamewright!

18 thoughts on “Ice Cool Board Game Review: An exciting family game of pursuit and escape…penguin style!”